What do you know about Egyptian makeup men? Have you ever seen the image of women and men with makeup in ancient Egyptian temples? Do you enjoy seeing these pictures?

Ancient Egypt was one of the first civilized societies in the ancient world. Many people, including historians and history enthusiasts, always love Egypt and respect the old Egyptian traditions.

Ancient Egyptians were interested in makeup and made various accessories using natural materials. In ancient times, in addition to women, men used makeup to be more beautiful in Egypt.

As we said, and we study the history of ancient books, the Egyptians usually needed four main ingredients to make up: malachite, vermilion or red ocher, henna, and Kohl.

The pharaohs of Egypt used the highest quality cosmetics because, in addition to beauty, the health of their skin, hair, and eyes was critical to them.

Ancient Egyptians used henna primarily for makeup and hair coloring. Henna made the hair of the ancient Egyptians more beautiful, and they also applied henna on their forearms and hands and changed their skin color. Of course, Kohl and henna are not only used in Egyptian makeup. These two natural substances are also common in the make-up culture of the Middle East and North Africa, and Egyptian pharaohs used them.

Malachite was used to beautify the eyes. Malachite is a copper mineral that causes a green shade on the skin. Egyptian men wore malachite around their eyes and used this stone as a shade.

For this reason, sometimes this material is also used to make lipstick. Red ocher was suitable for both lipstick and blush. Egyptian men and women applied this natural substance to their lips and cheeks.

Animal oil was one of the cosmetic ingredients of the Egyptians in ancient times. This type of oil binds cosmetics together. That’s why it was of particular importance. Animal fats protected the skin of ancient Egyptians from extreme heat. It also soothed their sore muscles from hard work.

It is interesting to note that employers usually pay these oils as part of workers’ wages.

Galena powder also had many antiseptic properties, and the Egyptians used this powder.

Egyptians had special equipment for makeup. Wealthy Egyptians used to buy quality cosmetics in the markets. But if people could not afford to pay a lot for cosmetics, they would make them at home with lower quality.

Archaeologists have found tools such as palettes, grinders, and applicators among the earliest predynastic burials. Because they believed in life after death, they put the necessary tools for life after death in the graves.

Why was makeup important in ancient Egypt?

In the following, we will explain why makeup was necessary for the Egyptians. What was the purpose of Egyptian men and women when they put on makeup?

It is interesting to know that makeup was not just to be more beautiful at that time. Instead, applying makeup to the ancient Egyptians was a form of beauty care. Egyptian men and women always cared about skin and hair care.

You should also know that only aristocratic men did not wear makeup, and it was not exclusive to them. But the general men also benefited from the benefits of makeup.

Worship of the gods

In ancient times in Egypt, makeup was not just for beautifying the appearance and body. Instead, the Egyptians used makeup to imitate the arrival of the gods. At that time, it was a human need, and makeup was essentially religious.

Another purpose of ancient Egyptians to make up was to maintain health. They thought Kohl would prevent eye infections.

Some of the cosmetics they used contained lead. For this reason, it was effective in warding off infection, keeping healthy, and preventing the ancient Egyptians from getting sick.

You might think tattoos in ancient Egypt were for the makeup and beauty of women and men, but you should know that they were religiously significant.

Ancient Egyptians tattooed images of Egyptian gods on the bodies of dancers and prostitutes. Historians have obtained this information from historical books. The reason for this was to protect them from evil. Their purpose of tattooing was to prevent sexually transmitted infections.

Egyptian men paid attention to facial and body hair. In books and art, we see images related to hairdressers. Egyptian men refused to shave or cut their beards during mourning. Interestingly, male priests pluck all their body hair, eyebrows, and eyelashes. They believed that they could sanctify themselves in this way.

Pictures from old books about ancient Egypt show that Egyptian male eyeliner was essential, and most Egyptian men had eyeliner and used it.

If you have searched about Egyptian makeup men, you know that Egyptian men in ancient times often cut their hair very short. Some even shaved their hair and used simple or braided wigs with decorative items.

During the Old Kingdom, Egyptian men had a relatively simple dressing style.

In the period around 2130 BC, they covered their legs by wrapping a skirt called “Shandit” around their waist.

The belt of this skirt was folded at the waist and sometimes in front. Men’s skirts were slightly longer during the Middle Kingdom of Egypt, around 1600 BC. Around 1420 BC, there were changes in Egyptian men’s clothing. They used a tunic or light blouse with sleeves to cover their body.

Egyptian makeup men and the use of jewelry

The Egyptians had unique customs and rituals for using precious metals and Egyptian jewelry. Men also used unique ornaments along with their makeup.

Egyptian makeup men and the use of soap and perfumes

Ancient Egyptian men and women paid much attention to their health and appearance. Egyptian men often cleaned their bodies in the Nile and used soap to remove skin impurities.

Men used to shave all their body hair to maintain good hygiene.

If you have researched Egyptian makeup men, you must know that Egyptian men used perfumes and aromatic ointments to get rid of their foul smell. These perfumes and oils softened the skin of Egyptian men. (Schulz et al., 1999) 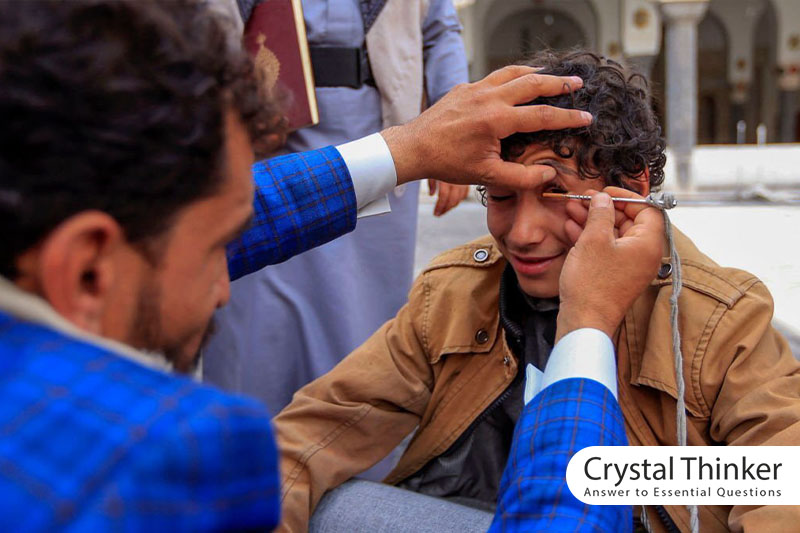 In ancient times, Egyptian men and women always used eyeliner to ward off evil eyes and dangerous spirits. But today, the use of eyeliner in makeup has more of a beauty aspect.
In modern Egyptian makeup, many men or women try to tan their skin. In the case of ancient civilizations, there was a belief that the lighter the skin, the more prestigious and beautiful a person was.

For this reason, we saw the production of skin whitening cosmetic products in the past. Ancient Egyptians used chalk to lighten their skin color, but the use of chalk did not last long and was used to lighten the skin temporarily.

Ancient Egyptians used iris water to strengthen their eyebrows, eyelashes, and lips, giving them a new color. This solution was very suitable for the blushing of their cheeks. But in modern Egyptian makeup, it is common to use chemical cosmetics made in factories.

In modern Egyptian men’s makeup, as in the past, eye shadow, eyeliner, cream to change skin color, and lipstick are used.

In this article, we provided explanations about Egyptian makeup men. We tried to explain the benefits of makeup for Egyptian men and women in ancient times. Egyptian men always wore makeup and had substantial reasons for wearing makeup.

We hope that reading this article was interesting for you. Thank you for reading the articles we publish.

Which religion came first in the world?

5 facts about social norms in the Middle East

Women’s norm-breaking | role of women in the 1920s

Ancient Civilizations That Influence Us Today | Important facts about 3 civilizations