What Is Femininity? Is femininity a kind of behavior? Is this word only for women? Or do men also have feminine behaviors? These are some important questions about ancient civilization topics.

Femininity has other names, two of which are named womanliness and girlishness. Femininity can be considered a set of traits, behaviors, and roles commonly used for women and girls. Cultural and biological factors influence some of the behaviors considered in female behaviors (Shehan, 2018). Of course, among psychologists and sociologists, the extent to which femininity is biologically or socially affected is debatable (Martin & Finn, 2010).

Femininity is biologically distinct from the definition of the female gender. Because men, like women, can display feminine characteristics. You may see a man with some feminine behavior among your family members or relatives. (Ferrante, 2010)

Traditionally, some traits are known as feminine traits in society. The most important qualities are elegance, gentleness, empathy, and humility. (Vetterling-Braggin, 1982)

Social and cultural elements are essential and influential in any community and will determine the characteristics of femininity. (Burke & Stets, 2009)

According to Tara Williams, modern concepts of femininity in English-speaking society began during the medieval period in the 1300s. (Williams, 2011)

In the early Middle Ages, women played traditional roles. They were just traditional roles such as being a virgin, a wife, or a widow. Since then, we have seen opportunities for the better presence of women in society.

In 1959, Erving Goffman, a Canadian-American sociologist, and in 1990, Judith Butler argued that gender was not a fixed or intrinsic issue. Gender is a set of socially defined actions and characteristics that eventually become feminine or masculine. (de Beauvoir et al., 2010)

According to Goffman, women try to present themselves as socially valuable, ornate, fragile, shy, weak, timid, and inadequate. (Ziegler, 2010)

Are femininity and masculinity measurable?

In the 1930s, Lewis Terman and Catherine Cox Miles began many scientific efforts to measure the degree of femininity and masculinity in individuals. They used the M-F scale, and other researchers and psychologists accepted it.

These models showed that femininity and masculinity are inherent and enduring characteristics that are not easily measurable among individuals.

You should know that these characteristics are not opposed to each other, and if the balance between them is difficult and unbalanced, we will see mental disorders in people. (Borgatta, 2001)

You may be interested to know more about femininity in Western culture. The ideal feminine appearance in this culture traditionally refers to women with long, straight hair and clear skin on their face and body. Other features such as a slim waist and body or short hair are feminine features in Western culture. (Davis, 2003) 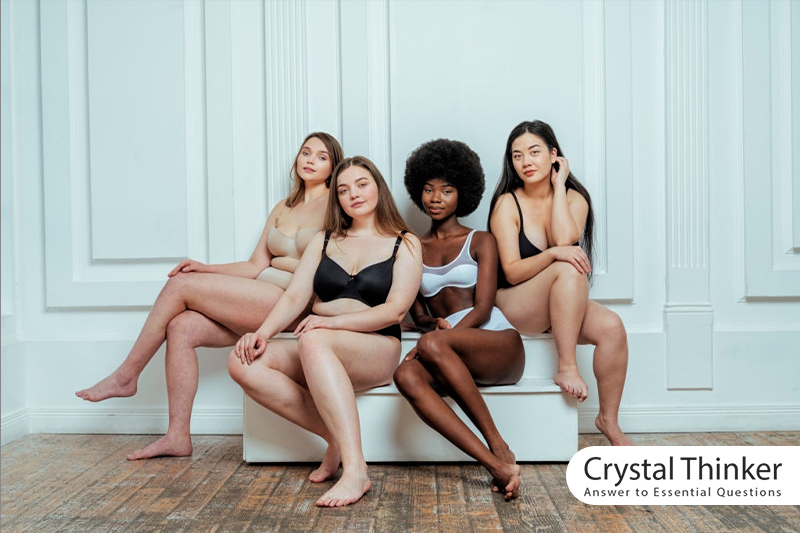 In other cultures, there may be different expectations about femininity. For example, in many parts of the world, having underarm hair in women is not considered a non-feminine characteristic. (McLoughlin, 2000)

Today, in most parts of the world, we see pink associated with feminine features and suitable for girls and women. But it is interesting to know that in the early 1900s, for boys, pink and blue were common and practical colors for girls and women’s clothing. (Bolich, 2007)

Of course, sometimes, the features known in Western cultures are criticized as feminine features. Because women in Western countries follow strict diets to improve their femininity, they often face many problems such as anorexia and other eating disorders. Most of these problems stem from modern ideals of femininity. (Mahowald, 1996)

Changing the appearance of the body with surgeries and other methods

Body modification is the intentional modification of the human body for aesthetic or non-medical purposes. One goal motivating people, especially women, to go for cosmetic surgery and change their body’s appearance is to read the perceived feminine characteristics of their peers and what society expects of them. Create in your body. For this reason, we see a variety of cosmetic surgeries daily. Most women in Western countries try to slim their waists and make themselves thinner with the help of medicine and surgery.

Shrinking the legs is another thing that we can name for women’s body deformation in ancient societies.

For centuries, smaller legs were considered an aristocratic feature of women in the Chinese Empire. For this reason, women used to tie their legs at an early age to strengthen this feminine feature. Although these measures made it difficult and painful for them to walk, they always sought to have smaller legs because at that time and in those communities, smaller legs were one of the main characteristics of women.

You may have seen pictures of African and Asian women with necklaces on social media. They used various rings to stretch the neck because the long neck is a characteristic of female beauty in these cultures. (Kislenko, 2004)

If you search for images of Padaung of Burma and Tutsi women on virtual networks, you will find these types of rings that increase women’s necks. (Thesander, 1997)

We hope you enjoy reading this and do not risk your health to enhance your feminine features.

What causes social norms to change?

Women’s norm-breaking | role of women in the 1920s

Difference Between Norms and Values with examples